Fashion is perceptive and often a mode of expression for various individuals. One such personality who has served an eclectic spread of noteworthy fashion picks is none other than ace Indian filmmaker – Karan Johar. The master of storytelling who has often had viewers engrossed in his fairytale inducing rom-coms replete with majestic backdrops and soulful musical compositions have also had everyone in awe of his flamboyant and experimental fashion statements that are quite out of the box.

Having a filmmaker so passionately involved in the parading of chic ensembles is quite unheard of. However, Karan Johar has made his name quite steadfastly reflecting the context of glamorous avatars that gives a sharper edge to men’s fashion. He’s showcased a diverse range of both traditional attires as well as eccentric western outfits that have led the way of how men can have fun with fashion too, so long they are willing to explore and find a true style as an extension of their individualism. On his birthday, here’s a roundup of all the OTT looks that Karan Johar has served over the years that struck a chord with masses and fashion critics alike for the sheer confidence and bravado with which he carried off each look with ease. 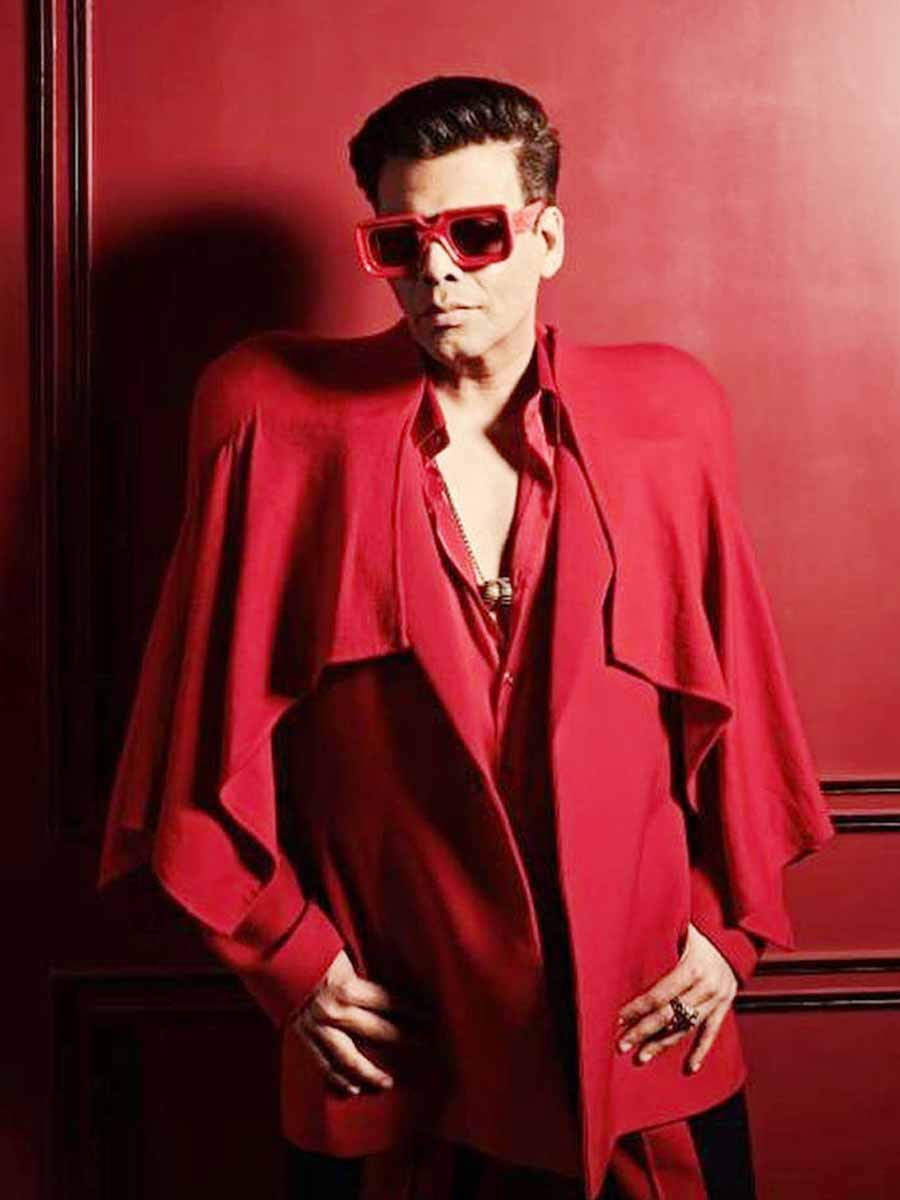 Monochromes are quite the craze in the fashion landscape right now. How Karan upped the whole glamour quotient of it recently, is by opting for a fiery red ensemble. What caught everyone’s attention were the sharp structures that elevated the silhouette of the whole get-up. He took the monochrome game to a whole new level as she layered his overlapping jacket with a stunning cape that had a crop cut accentuating its design. 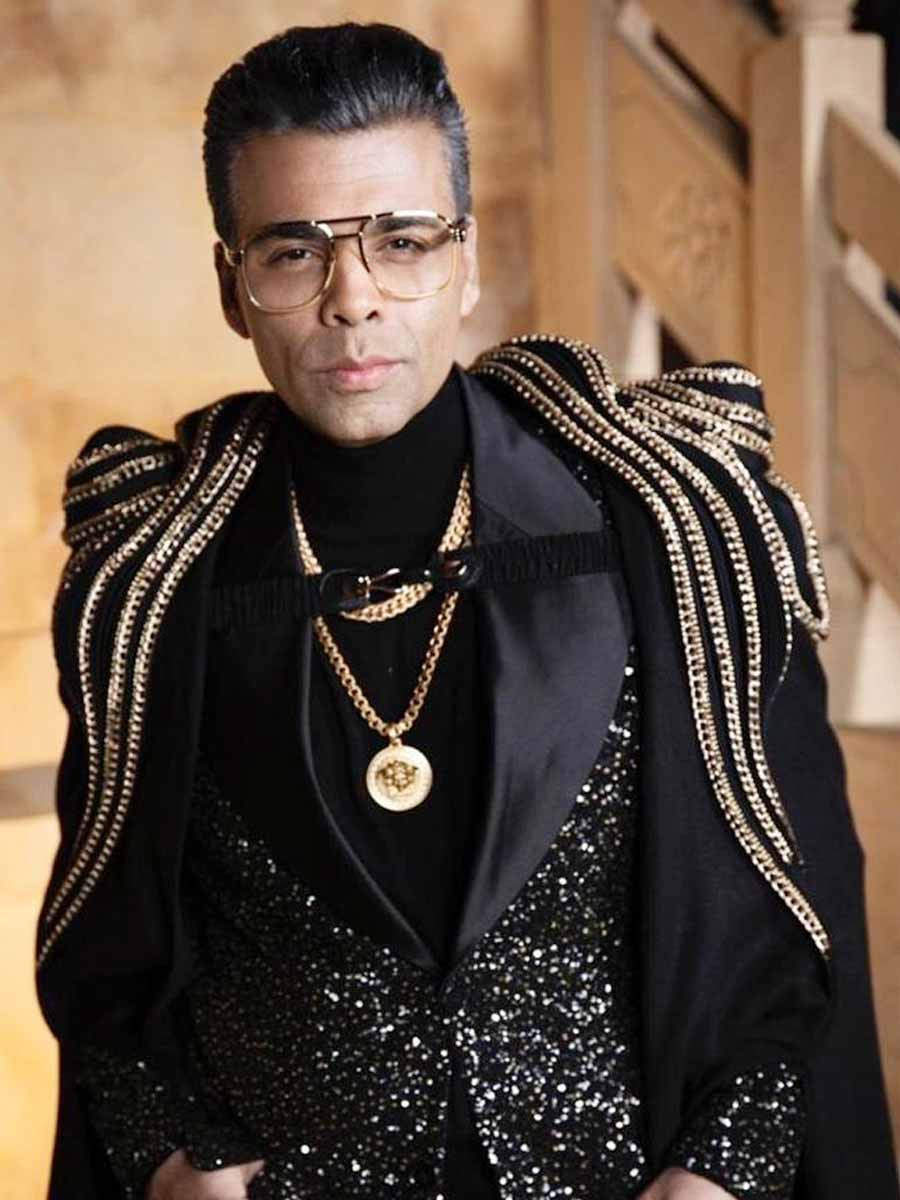 Who said chunky jewels are only for women? Men’s fashion took an all-time high flight as Karan opted for a flamboyant look with this black OTT pantsuit that shimmered and shined a copious amount of glint. Expressing his clear love for the art of layering, he topped his black shirt with a sequin black blazer, and to add the dramatic flair, he further added a long black cape to complete the look The cape had a flattering silhouette as it featured structured shoulder pads and impressive thick chains that were intricately embroidered across the shoulder-length. The design of the cape also had a buckle-like enclosing in the front which held the cape in place. He accessorized with a jazzy golden statement necklace with an eye-catching pendant and a stack of golden rings for his fingers which complemented the entire get-up effortlessly. 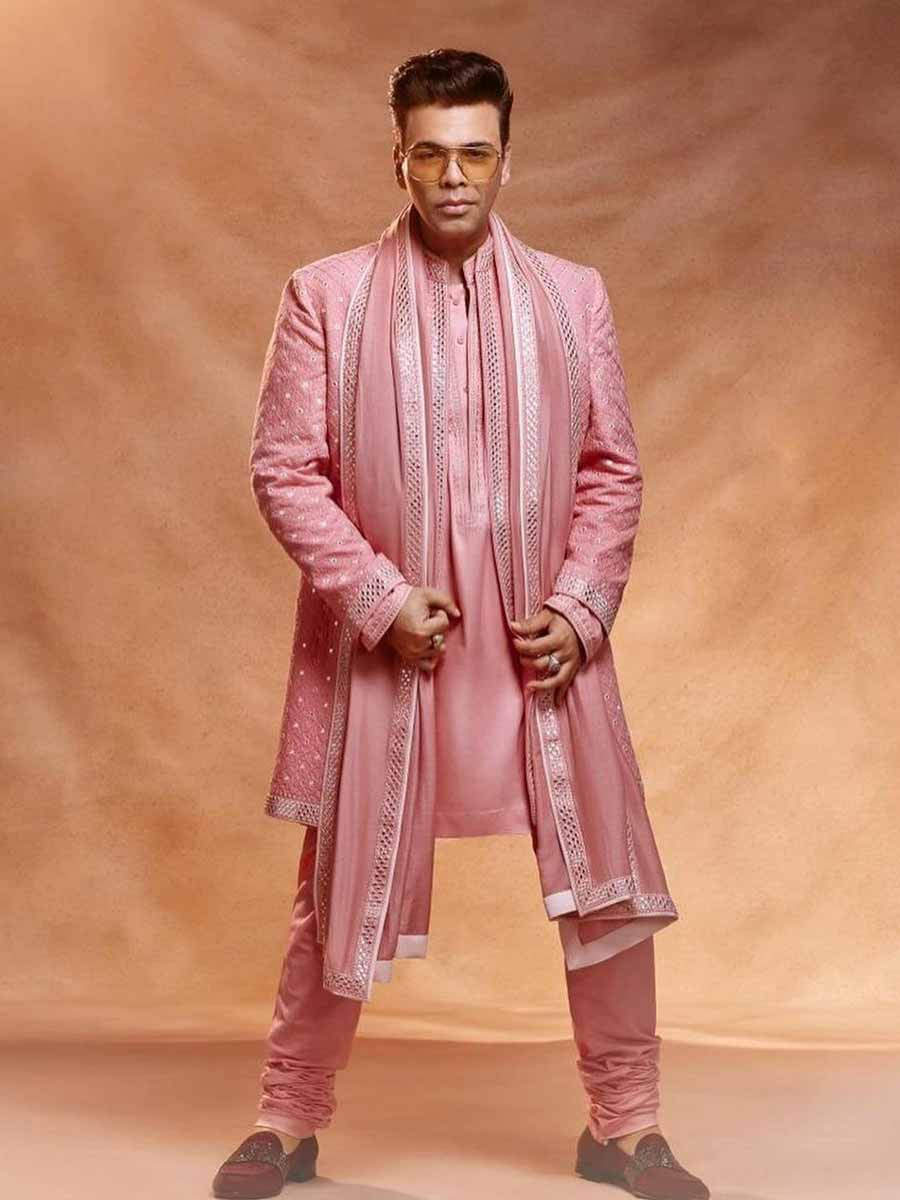 Whoever said Pink is not a guy’s colour – didn’t envision Karan Johar acing this ethnic look as he opted for a powder pink sherwani set. The subtlety of the sherwani further helped the colour of the ensemble to stand out. The entire sherwani had exquisite embroidery work across the bodice which was done with silver sequins and detailed thread work. It was further studded with mirror embellishments which gave a classy sheen to it. He paired the sherwani with a matching dupatta and churidar, though the bottom fabric was plain, the stole had the same embroidery work as the kurta. He accessorized the getup with a pair of sunglasses and black shoes and as this was his outfit for the much-discussed Ranbir-Alia wedding, he completed it with a matching pagdi to go with it. 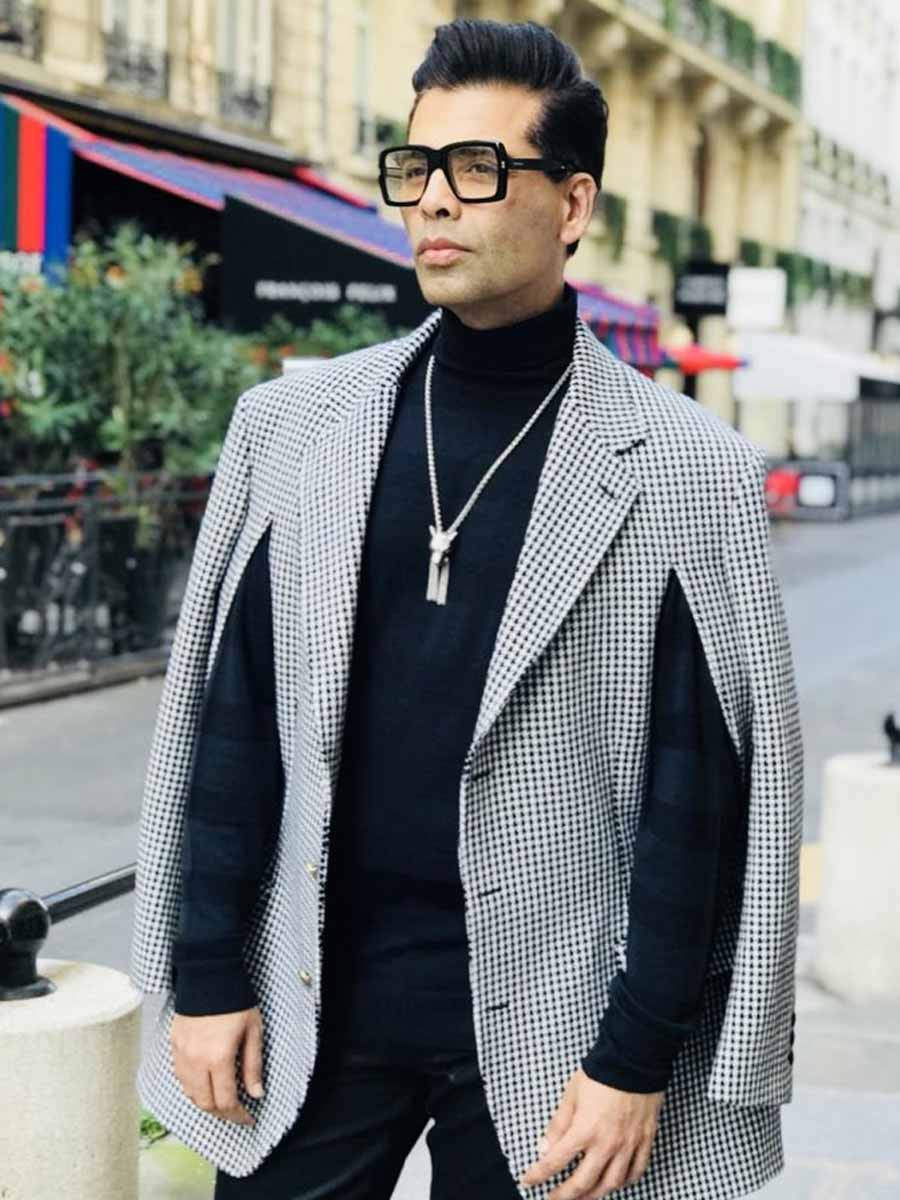 Karan’s love for the International fashion brand Gucci is very well-known. Time and again he has gone on record to express his love for the ace fashion brand and from showcasing an impressive palette of clothing from the designer brand replete with athleisure to formal wear – he has left no stone unturned in making some exceptional choices over the years, in collaboration with his admiration for Gucci’s tailored ensembles. One of the best looks that he has served over the years, styled in a Gucci look from head to toe was when he visited a fashion week in Paris. He went for a black monochrome look that featured a tee with a high-neck silhouette and pants. He layered the tee with a grey chequered designer coat with cape-like sleeves which added a dramatic vibe to the look. He rounded off the look with a matching pair of shoes, a statement silver necklace, and black-rimmed glasses. 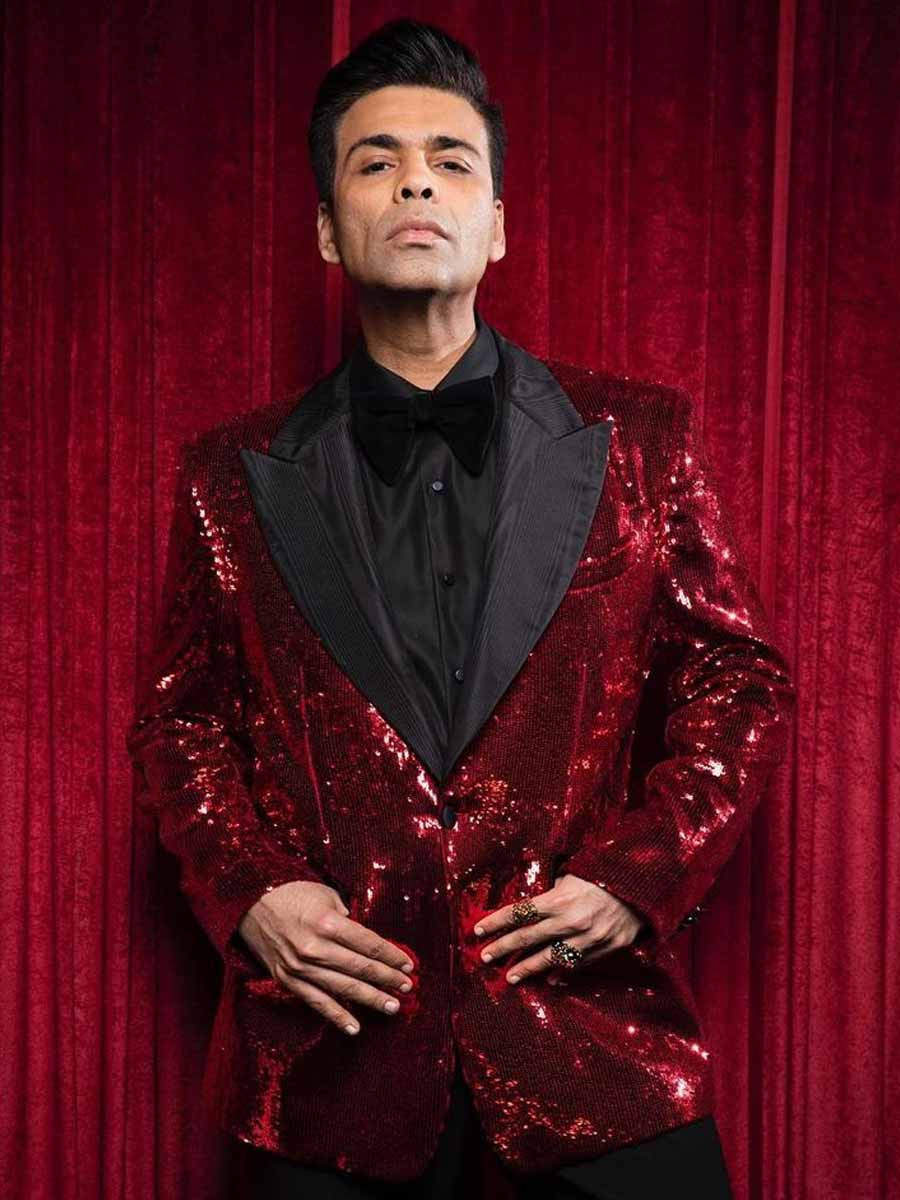 Sequins seem to be a hot favourite of Karan Johar who is often seen making an appearance in this wardrobe choice. Going for yet another red-hot ensemble – this time he picked a sequined tuxedo layering a crisp black shirt and trouser pants. A bowtie was also added to the look which upped the chic persona of the entire look. Keeping it neat and sharp, he didn’t go for any high–end accessories with it. The exquisite red sequined work across the bodice looked extremely classy. The suede bowtie added a vintage edge to rather contemporary styling. 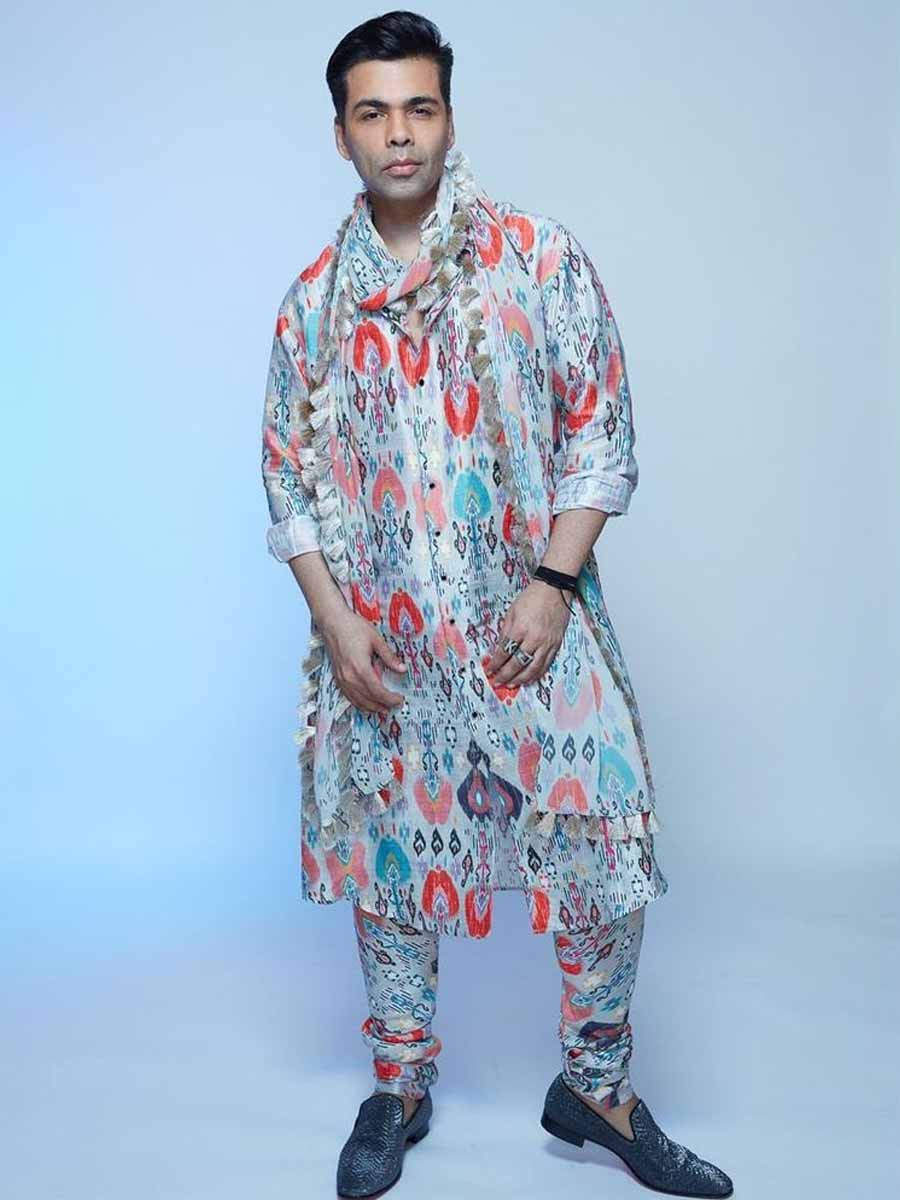 Taking a detour towards ethnic looks, this time Karan played with the print-on-print trend right off the runway. He wore this chic kurta-pyjama set to Ambani’s Ganesh Chaturthi celebrations. This extravagant grey silk Kurta featured vividly colourful prints across its bodice. The prints featured complementary coral and turquoise shaded accents that made the patterns look even more eye-catching. The highlight was the metallic tassels attached to the matching dupatta which was quite a unique touch given by the designer. Ditching the jewellery, Karan went with a statement pair of juttis to add on to his Indian look and it sure rounded off the look with utmost panache. 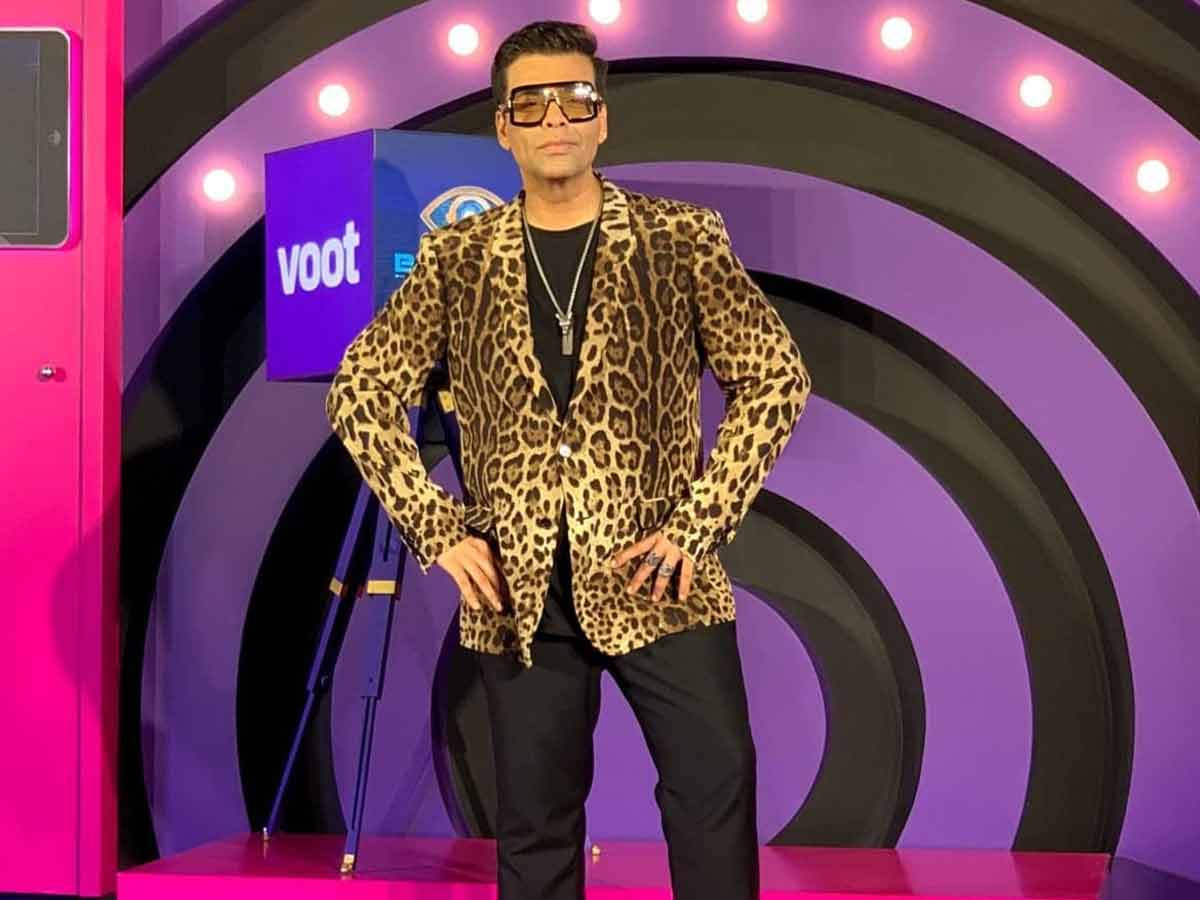 Karan Johar showed an extravagant side of his unabashed passion for fashion with this loud leopard-printed look. This was for a reality show where he turned up looking like he’s walked out right out of a fashion magazine. He elevated a simple black tee and trouser look with a larger-than-life leopard printed jacket. This blazer with a sexy cheetah print was an absolute statement-making show-stealer. This time he went for some quirky jewellery as he complimented his look with a silver locket, some statement silver rings, and brown glasses and he was ready to ace it. 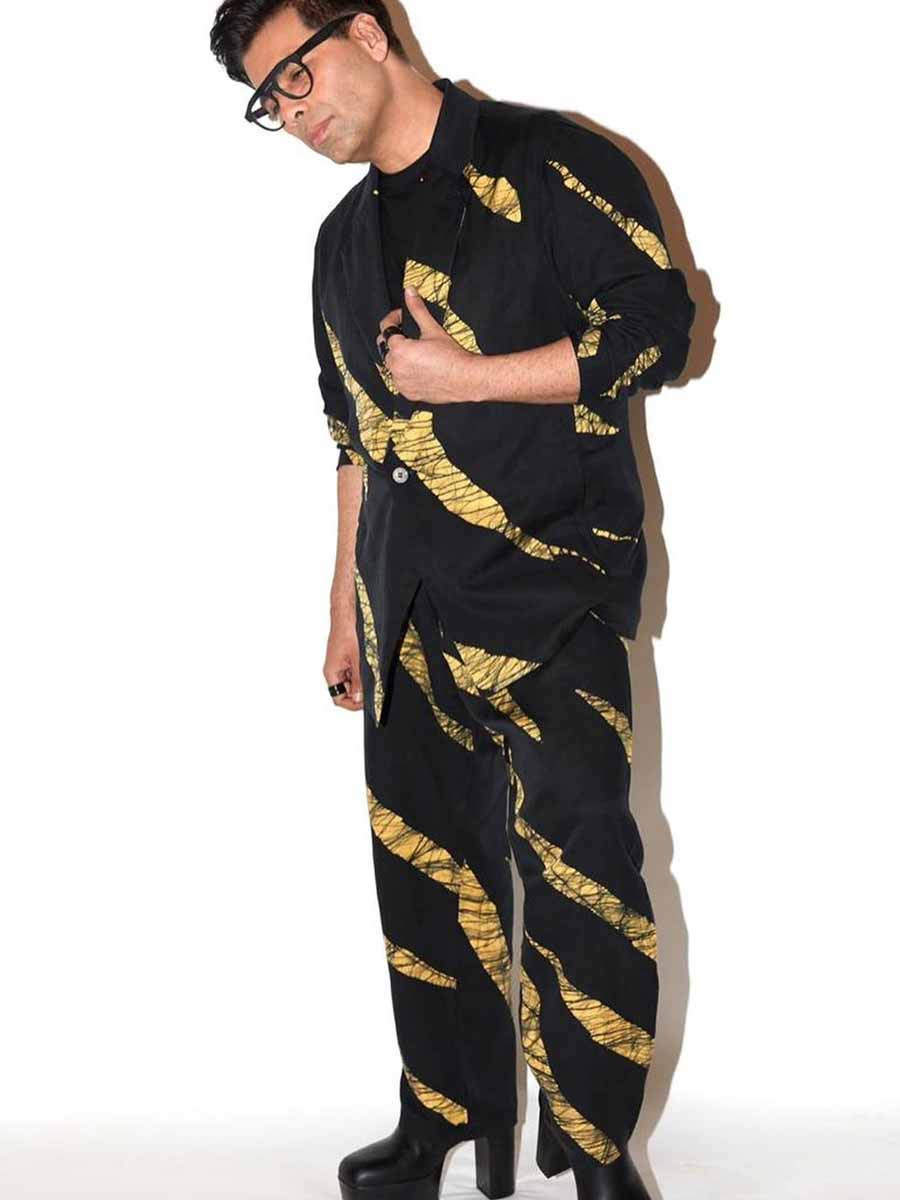 
Probably one of the biggest highlights of all the memorable fashion statements served by Karan Johar was when he blurred the lines and embraced gender-fluid glamour. The suit was basic but chic nevertheless for the bold demeanor of Karan who added his personal touch to it. The suit had black as its base colour with yellow striped accents. He wore a basic black tee underneath the matching blazer jacket and pants set. The talk of the town was his footwear. He went for a stunning pair of black leather boots with high heels. Making the look a tad bit edgier, he rounded it off with black-rimmed glasses and a chunky stack of rings.


Karan Johar has been a force to reckon with when it comes to putting a glamorous side of men’s fashion on the map. He has steadfastly gone ahead with all kinds of experimental looks without being fearful of judgments and being unapologetic regarding how he wishes to express himself through fashion. On his birthday, here’s a roundup of all our favourite looks that shows an interesting blend of ethnic, western, and Indo-western styles.